The pages of the Bible are full of characters.  The characters may be explicitly identified in the Biblical narrative, or, as we have explored by way of the Bible Play earlier, implicitly present.  As the teacher, it is extremely important to identify the inspirational character in the narrative that is being explored.

In order to understand the concept of the Biblical and inspirational character, we must first understand something about the Bible.

The Biblical record has been carefully passed down to us by the Jews, who see the Old Testament as not only the history of their people, but a sacred text entrusted to them by God which is to be shared with the entire world.  In this sense, Judaism is unique to many religions who view their sacred texts as proprietary information, accessible only to those with the proper spiritual credentials.

In the same way, the New Testament may be seen as a compact version of the same, self depreciating narrative of the origins of Christianity.

Yet the point of the Biblical narratives, which have been carefully preserved and widely disseminated against all odds, is not to justify the position with relationship to God of Jews and Christians, rather, it is to point out that it is impossible for anyone to claim a place of privilege with regards to The Holy One.

As one reads through the Bible, it quickly becomes apparent, as early as the second chapter, that the performance of good deeds is not a preresiquite for inclusion.  While being a Biblical character may bestow upon the individual a certain amount of fame, it does not automatically qualify them as an inspirational character.

Yet there is one action that is and always will be pleasing to the Holy One, it is the act of starting where one is and desperately seeking after God. 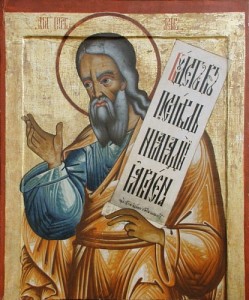 “Here I am. Send Me!” Isaiah, an example of an Inspirational Character
{18th century Russian icon of the prophet Isaiah located in the Iconostasis of Transfiguration church, Kizhi monastery, Karelia, Northern Russia, painted by an unidentified artist during the first quarter of the 18th century}

The desperate seeker, from Isaiah declaring “Here I am! Send Me!” (Isaiah 6:8) to the Apostle John, who, upon hearing John the Baptist call Jesus the Lamb of God (John 1:29), arose and ran after Him, to the desperate man or woman today, crying out in the middle of inexplicable pain and loss for answers, the desperate seeker is the inspirational character.

The one who is constantly seeking and moving towards God, the one who chooses to turn the other cheek, to lay down their life for others, to accept and carry out the hard assignments, to walk humbly with the Holy One, to seek justice despite incurring personal injury, to love their neighbor as themselves, they are the inspirational characters.

Once identified, it is extremely important to supplement your knowledge of this person by exploring them as they appear in other Biblical narratives, if any, as well as other credible historical references that may be available.  The class will connect to the the Biblical narrative and the assignments presented only to the extent that they connect to the inspirational character.

Further, one of the goals of the class setting is to bring the class as close as possible to the inspirational character, so that they may be in a position, as the inspirational character was, to accept the assignments which are presented to them as individuals.  For one, it may be to reconcile with a family member, for another, it may be to pick up their mat and walk, for another, it may be to accept a position of influence to root out corruption.

Whatever the assignment may be, the inspirational character will help those in the class to find the courage to seek out and accept them.  For the Lord is with those who seek, and great blessing awaits those who are willing to say, along with Isaiah, “Here I am. Send me!”

As you and the class explore the text together and are lead by the Holy Spirit, it will become evident that all of those present have the potential to be the inspirational character in their home, workplace, and beyond.

This site uses Akismet to reduce spam. Learn how your comment data is processed.