Here at The Mint, we have a soft spot for both Entrepreneurs and Angel Investors, for they are to a business what Adam and Eve are to the Genesis narrative. They are not the creators themselves, but they are the ones who work together in the creation of a business so that it might to flourish.

Our friends over at onlinemba.com have put together a great video series called Minute MBA. In a recent video, which can be seen here (or by pasting the following link in your browser: http://www.onlinemba.com/blog/video-how-to-fund-a-startup), they eloquently, in both pictures and words, walk us through the startup funding process from idea, to seed capital, through to an IPO in under three minutes.

They also stress the importance of timing the solicitation of the appropriate flavor of capital at the right stage in the company’s life cycle. It is an extremely import detail which cannot be overstated. 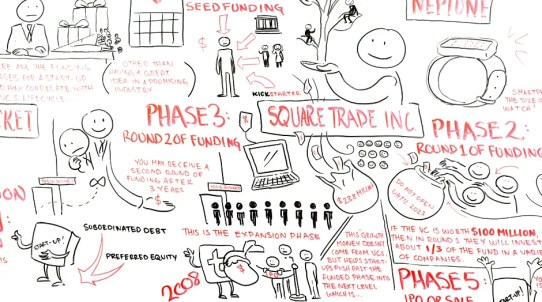 While there is much written about ideas, business plan development, and the life-cycle of a startup, which is naturally where a majority of the action takes place, there is often less attention devoted to the preparation of the garden plot upon which the seed capital will be planted into.

We call this garden plot the entity structure. While many entrepreneurs wait until the Angel Investor appears on the scene to prepare the garden plot, there are some things that can and should be done by the entrepreneur at or near the conception of their venture to ensure that any seed capital they manage to attract is not needlessly scattered to the wind.

{Editor’s Note: At this point a blanket disclaimer is in order, at this point, we are neither an attorney, CPA, tax, or other type of registered professional. Even if we were, the following is in no way intended to address any one specific situation. Any decision regarding entity structure should be taken after consulting an attorney and/or CPA who understands the laws of the land where the enterprise is to be founded and operate (should they not be one in the same) as well as the specifics of the owner(s)’ situation and goals.}

The following are three types of potential entity structures that may be employed to form a receptacle that can receive seed or, in some cases, even angel stage capital depending upon the requirements of the potential investor(s).

Think of it as the entrepreneur building their own garden box into which they will pour the rich soil of their time, effort, creativity, and ingenuity. A garden box that is prepared to receive seeds that will be watered by the blood, sweat, and tears of the entrepreneur in hopes they will blossom to the point where the angels will take notice, muster their resources, and work their own creative magic.

When the angel gets involved, they may see that the garden box is well-tended and bearing fruit. Depending upon the circumstances, they may seed their capital into the existing garden box, make substantial additions to it, or ask the entrepreneur to take their idea out of the garden box altogether and purchase them a field large enough to accommodate the flood of IPO funding.

We now digress to that lonely place where the entrepreneur sits alone in their yard, trying to decide what type of garden box to build. The following is a menu of basic garden box designs from which to choose with the careful guidance of a qualified professional with intimate knowledge of the actors and the circumstances:

Perhaps more importantly, establishing the first entity gives the entrepreneur a bit of practice, both at corporate governance as well as letting go. As parents of college freshmen (and Suzy Bogguss) will tell you, it’s never easy letting go. The saying goes sevenfold for an entrepreneur and their idea. However, letting go, to some extent, is the ultimate, often unstated goal of soliciting angel types of investment. It is best to take the first, painful step in the privacy of one’s own home to avoid any unwanted emotional breakdowns as they sign away a portion of the rights to their baby entity in return for the cash needed for it to grow and thrive.

This is a deep, nearly metaphysical, aspect of the interplay between entrepreneur and angel investor, and we must leave it there for the moment and get on to the designs.

Design 1 – The Simple Promissory Note: While most entrepreneurs and investors alike tend to think of seed capital as purely equity, we believe that in terms of ease of set up (meaning fewer legal and accounting fees) and understanding, creating a promissory note directly payable to the seed fund investor and the vehicle entity that is wholly owned by the entrepreneur for the amount to be invested offers a simple, if not elegant way for the parties to marry their money and idea on a trial basis.

From the entrepreneur’s standpoint, the ideal promissory note would provide for the use of the investor’s funds for a mutually agreed upon amount of time, during which interest may accrue at an agreed upon rate, but no payments on the note are due until the entity is projected to be able to have the free cash flow available to make good on the obligation.

The investor may be afforded some protection by perfecting a security interest against a portion of the entrepreneur’s other assets which would act as collateral. We refer to this type of clause as a negative outcome exit.

However, as the reason for the decision to invest in the first place is presumably because the investor believes that the venture will succeed and grow, it would make even more sense to include a positive outcome exit. In the case of the simple promissory note structure, the positive exit would include the right for the investor to convert the note into an equity stake of a previously agreed upon percentage of an entity that is again, previously agreed upon to be formed as a next stage investment vehicle for the new venture.

The promissory note strategy is a form of baby IPO that allows for the intimate gestation of the venture while it is at its most vulnerable by two parties who have a vested interest in seeing it grow and develop.

This strategy does not, however, offer the tax advantages usually associated with the investor’s ability to write off any losses that the venture may incur in its early years that the strategies mentioned below in Design 2 and 3 offers. Then again, if a portion of an investment return is attributed to losses incurred in the early years, it may delay or even discourage the wise and judicious development of the venture by lulling the entrepreneur and investor alike into a false sense of security as the piling up of losses may be explained as beneficial with regards to tax liability.

Design 2 – The S-Corporation: An S-Corporation, while a bit antiquated, is still a favorite entity structure for closely held ventures. S-Corporations are subject to state administrative rules related to corporations and may be formed with a fixed number of shares that can be sold to a limited number of investors.

Along with the S-Corporation come the joys (read responsibilities) of corporate governance. There is more ongoing paperwork involved and therefore more attorney and CPA fees. However, the S-Corporation is a much sturdier garden box than the simple promissory note. It serves to isolate the venture and give it form; it also allows all parties to “enjoy” the tax benefits of the early years where the venture bleeds money.

Another advantage of the S-Corporation structure is that it can later be converted into a C-Corporation, which is the field upon which the great flood of the IPO can be released.

Design 3 – The Limited Partnership: This option generally allows for the greatest amount of entrepreneurial flexibility to operate with the greatest number of potential investors. Depending upon the requirements of the Limited Partners (LPs) and the myriad of exit strategies available, the agreements can be quite complex and again, there can be a great deal of legal and accounting fees incurred during the setup and operation of the LP.

Under the Limited Partnership model, the General Partner will generally charge a percentage of revenues as a management fee and an additional percentage or fixed amount as an investors’ service fee to the partnership in exchange for dealing with 100% of the headaches. These fees may be cash flow contingent and may vary depending upon the extent that the General and Limited Partners are sharing the profits or losses of the venture.

The Issue of investor accreditation and other rules, laws, and regulations:

In the case of Design 1, it may not always be possible to solicit funds using this vehicle depending upon local laws and regulations regarding who may or may not enter into a promissory note. In a perfect world, this would not be a barrier, however, we do not live in a perfect world.

Further, in Designs 2 and 3 (and in some cases, Design 1 as well), there exists the Federal requirement that all investors be “accredited,” meaning that they have a net worth of over $1MM or have an income of at least $200K for two of the past three years ($300K if married) and the expectation of generating this level of income during the current year. There are some other ways to qualify which can be seen here http://richard-wilson.blogspot.com/2008/08/accredited-investor.html but the $1MM threshold is the most common.

In summary, Design 1, the promissory note, is simplistic in that no new entity that needs to be formed. However, it does not offer much in the way of income tax advantages or flexibility. It is best suited for a specific project or purpose with an eye towards the larger garden boxes that will later be built. Designs 2 and 3 both have the complication of entity formation and governance. The ultimate advantage of options 2 and 3 are enhanced liability protection, greater operating flexibility, and the ability to control income tax considerations to a greater degree.

Again, these are just a few of any number of possible designs, and an attorney and or CPA that is close to the specific situation that is being addressed is in the best position to be able to advise which specific design to tailor so that both entrepreneur and angel investor, Adam and Eve, as it were, will be properly clothed.

If you are an Adam in search of an Eve, or vice versa, or an Adam and Eve who have just found each other and are in desperate need of a Virtual CFO to get things to the next level and beyond, we would love to help! Simply contact us at the email address below to inquire about our customized, tailor made CFO services here at The Mint.