On October 6th, Portland joined other US cities by kicking off its own version of the increasingly popular Occupy Wall Street protests with approximately 5,000 people amassing at Tom McCall Waterfront Park where SW Ankeny meets Naito Parkway.  While no specific manifesto has come forth, the group generally comes across as unified against corporate greed and corruption.

Approaching Occupy Portland’s ground zero, it became apparent that the perhaps the only thing that unified this loose coalition of protesters was a general feeling of discontent.  It was equally apparent that general discontent can be a powerful unifying force, and that as the marches and occupation got underway, the protesters found in one another the camaraderie that is inherent in common struggle and sacrifice.

Amongst the many and varied grievances that could be observed by reading the protesters’ signs, flags, and slogans, were:  support for the cause of the Palestinians, pleas to tax the rich, outrage against corporate greed, and long-suffering environmental concerns.   While these grievances have been longstanding for certain sectors of the population, what was most striking was the breadth of demographic and socio-economic makeup of those gathering to launch Occupy Portland. 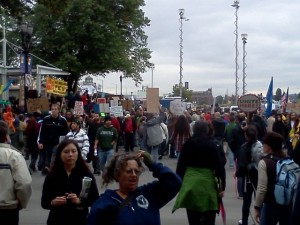 Protesters of all Stripes Gathering to kick off Occupy Portland on Thursday, October 6th 2011

While students resembling John Lennon and Guy Fawkes masks tended to stand out in the crowd, the presence of veterans, college students, retirees, and stay at home mothers spoke to the wide ranging discontent that has gripped Americans who are increasingly identifying themselves as the “other 99%” in sharp contrast to the top 1%, the label that has come to represent the wealthy and corporate interests.

As the exuberance of the protesters grew and their numbers at Waterfront Park began to swell, a few blocks away, up Burnside and 5th, the mood was quite different.

Despite assurances by both the protesters and Portland Mayor Sam Adams that the protests would be peaceful, financial and governmental institutions, which imagined themselves in the path of the unannounced route of the march, were taking precautions.  Banks planned to lock their doors and the increased Police and private security presence in the neighborhood was conspicuous.

There were rumors of Anarchists from Eugene coming to cause trouble.  Adding to this perceived threat was the uncertainty of the effects on transportation in the downtown core.  Needless to say, on this autumn day, Portland did not feel like the relaxed City in which we dwell.

Thankfully, these fears were unfounded.  Both Protesters and Police are to be commended for tacitly working together to maintain the peace and dignity of the protest.  Mayor Adams went as far as to waive the City’s no camping ordinance so that protesters could pitch their tents and stay the night.

Whatever the outcome, it is refreshing to see that Occupy Portland is helping so many people to find their voice and the City of Portland, true to form, welcoming them with open arms.