We first heard about the Free Lakota Bank back in 2008.  From what we understood at the time, it was a bank in the free sense, in that they coined, circulated, and accepted precious metals for deposits.  At the time, it was hard to imagine the importance of the Free Lakota Bank, both from a monetary standpoint and, as we will explore today at The Mint, the standpoint of sovereignty.

We had heard nothing more of the Free Lakota Bank until we received an update yesterday from the Ithanchan (Director) of the Bank, Canupa Gluha Mani.  It gave us some valuable insight into the origins of the Bank and the broader struggle for sovereignty which is occurring in the background as the financial debacle which passes for an economy in the West circa 2012 continues to erode the sovereignty of the nation state.

Before we share the Ithanchan’s words with you, we wish to interject our own analysis of the current state of national sovereignty.  The nation state, as many have come to know it over the past several hundred years, is disintegrating.

Rather than work to change or hasten the destruction of the failed nation state system, which are the tactics of choice for the majority, we at The Mint advocate that the best course of action is to simply get the heck out of the way.

It is easy enough to recognize that one should leave a burning building when the alarm sounds, and that one should run clear of large structures when the earth begins to shake.  However, when an economy and financial system are simultaneously burning and collapsing, a different course of action is called for.  The action involves declaring your individual and family sovereignty and then seeking to align with other sovereign individuals and family units which hold a similar set of values.

Doug Casey, the famed investor, believes that the world is in the process of aligning itself in “phyles,” which is a Greek word which roughly translates into clans.

Now, the communication from the Ithanchan:

My name is Canupa Gluha Mani, and I am the Ithanchan of the Free Lakota Bank, whip-man of the Black Hills Treaty Council, warrior of the Strong Heart Society and a proud member of the Lakota Oyate. 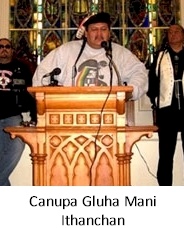 In 2007, my colleagues and I traveled from the Pine Ridge reservation to Washington DC, declaring our sovereignty and independence from the tyranny of your government and more than a century of abuse and ignoring the treaty of Fort Laramie.

Since then, we have undertaken many tasks to gain the support and recognition of the international community. We sent ambassadors across the globe, established our own monetary system, our own bank, we began issuing our own travel documents and most importantly, started generating our very own profit. The Lakota people are no longer slaves to your government.

In 2008 the Lakota people launched the Free Lakota Bank, in accordance with the demands of the treaty council, in partnership with the American Open Currency Standard and with protection from the Strong Heart Warrior Society. The bank quickly became an international sensation. Support poured in from across the globe, and our project was instantly overwhelmed. It has taken more than three years to catch up on the backlog of interest in our groundbreaking financial institution. Though we still have a long way to go, our founding depositors have helped us accomplish amazing results since inception.

Though we are still in the development stage, we can no longer operate quietly. As your governments march steadily toward their own destruction, they cannibalize the citizenry through taxation and regulation.

For example, those of you paying attention may have noticed that, through the work of your government’s Financial Crimes Enforcement Network, private banking is now effectively dead. In the past, US authorities required foreign banks to report directly, and most international banking centers simply ignored the requests. Now, all banks that wish to participate in the Federal Reserve banking system must report account data to their own governments, and with a few remote exceptions, governments simply swap data with each other. Moreover, popular US peer-to-peer payment systems now issue 1099’s for payments received, creating a tax liability for those who wish to transact online. As the government fails, look for the squeeze to continue.

We known how it feels to be treated like this. The basic rights of indigenous people across our lands have been trampled on for years. We were stolen from, forced into colonialism, massacred, cheated and abused in just about every form imaginable. I know first-hand what it’s like to stand up to the federal government. I was there at wounded knee in 1973, firing shots in defense of my people. I wish the people of this country never have to personally witness such an atrocity, but I believe that day may come for you too to draw your line in the sand.

We do not intend to do nothing while your government implodes. In fact, there is great profit to be made providing tools and access for people like you to live a sovereign life. There are many components to sovereignty, but one that I believe to be most important is economic independence. You must have the ability to earn your own profit in an objective form of value, like silver or gold. You must have the ability to easily do business with others that demand payment in the same form. You must have the ability to use objective forms of value to satisfy the needs and desires of your life. The Free Lakota Bank is working diligently to create the network for access to the new economy, built of the mutual exchange of value.

Over the years, many have asked why Lakota elders chose to start the Free Lakota Bank. The Lakota people are warriors. Warriors can achieve victory. Like Crazy Horse, Sitting Bull, Rain in Your Face and other warriors before them, my elders wish to leave a legacy, a positive impact on turtle island, which you call North America, and the people that inhabit Her.  The Lakota legacy will be to emancipate the people of this land from financial slavery.

I encourage you to join our economic system. Bank with us or other commodity banks and be a part of our success while you create your own. The Free Lakota Bank is the first bank in the world to offer deposits and investment opportunities exclusively in silver, and even pays interest on contract deposits in ounces of metal.

Over the next few months, stay tuned for several important announcements from the Free Lakota Bank. Thank you for your continued support and remember, as the great warrior Crazy Horse said, Hoka Hey! Today is a good day to die!

While we may never hunt and use every part of the bison, we at The Mint do share the vision of free banking as the key to sovereignty and congratulate the Lakota on the steps they have taken to reclaim their sovereignty.

This also reminds us that we must write a letter to Evo Morales, Bolivia’s President, regarding free banking and its link to sovereignty.  Perhaps holding the Lakota out as an example to him will finally get his attention.