Tonight’s State of the Union address by President Obama will once again draw a sharp focus on gun control, or lack thereof in the United States.  The theory held out by gun control advocates is that restricting access to guns will serve as a deterrent to violence.  Unfortunately, the statistics on a national and global scale argue firmly against this cause/effect relationship, as the following info-graphic illustrates: 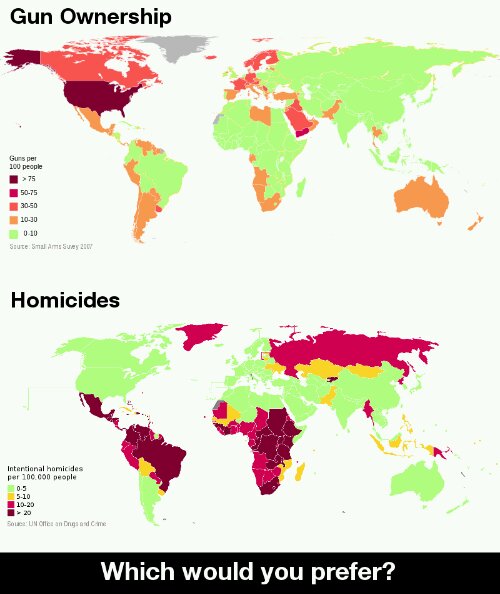 Contrary to Utopian logic, an increase in overall gun ownership serves to decrease the rate of intentional homicides, not the reverse.

If a higher incidence of gun ownership paradoxically produces a lower intentional homicide rate, why would the idea of gun control be floated by the leader of the “Free” world at all, especially when such ideas are in clear contradiction with the document which He has sworn to uphold?

The Benefits of bad news

Mr. Obama and the rest of the well-meaning individuals who are at the head of the rallying cry for increased gun control have one thing in mind when they float such ideas:

Columbine, Sandy Hook, and innumerable other mass shootings in recent history have cast a stigma over gun ownership that world improvers, our pet name for those who believe that they and only they know what is best for humanity, have latched on to as evidence that only certain persons should be allowed to possess firearms.

Clearly, mass shootings are horrific tragedies and attempts to avoid them should be made at all costs.   Again, paradoxically, they seem to occur in environments when the instigator(s) are the only ones in possession of a firearm.  However, while they race to the top of the news feeds when they occur, mass shootings are generally outliers to the human experience.  As such, while they are horrific tragedies, they are not as common as one would think.

It is for these reasons, both that they are uncommon and that they are horrific, that the national psyche attaches to them and examines them the way one would rise to investigate an unexpected sound in the night.  For it is our rightly held belief as human beings that these things should not be, and if they have occurred, then something must be wrong.  The glory of free societies is the indomitable belief that if something is wrong, we, the people, can work to make it right.

In this sense, while we cringe at the many headlines that announce a mass shooting, or any act of violence, for that matter, we have trained ourselves to breathe a sigh of relief.  For the very fact that they are being reported on means that an investigation of their root causes will rise to a level of national debate.  This reporting and national debate is one of the healthiest expressions of free speech that can occur.

While we do not believe that gun control will serve to mitigate tragedies, we are pleased that the debate rages on, for the answers are out there, and it gives us hope for all of mankind that we are diligently searching for it.

After you are shocked by the next tragic headline that comes your way, remember to give thanks for your reaction.  For this reaction, at its core, is an inkling of the hope for the betterment of all mankind that is alive and well within you.

So carry on, Mr. President, as Free men and women, we are privileged to hear you out, as well as disagree on solutions.  We share your sorrow at these events, and will work to make a better world for ourselves and our posterity.