If the events of the past week have not convinced you that there has been a permanent, fundamental change in the financial markets, perhaps nothing will.  As much as the numbers seem to stay the same, one has the sense that something is very, irreparably, wrong.

If you are trying to put your finger on what is causing the uneasiness you are feeling, allow us to offer our humble opinion.  The world is coming to the realization that all of the financial rescue programs that have been floated as the “cure” to the financial crisis by various Central Banks and Governments have done nothing useful.

To put it harshly, they have not only failed, they have made things worse.

What they have done is to buy time for the banks to sell out of their losing positions and be made whole at the taxpayers’ expense.  Now, the jig is up.

The taxpayers see that the fix is in and are calling for the heads of their elected officials.  For the most part, the heads have been handed over peacefully via democratic elections.  Those that still have their heads are quickly backpedaling and distancing themselves from any Government sponsored bailouts.

With the resolve of the Governments of the west to continue “bailing out” the financial sector clearly in doubt, the heavy lifting is left to the ultimate and most deserving scapegoats, the central banks.

But what can they do?  Their only solution involves further exposing themselves for the fraud they are.  “If the central bank can simply print the money to pay debts, why should I work?” is the cry from the Proletariat.

That cry is being heard steadily in Greece and now Spain. 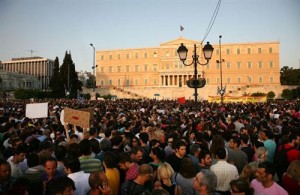 It has taken a different tone in the Arab world, where revolution has increasingly been the rule ever since the Gregorian calendar turned to 2011.  The media explains what is happening in the Middle East as a “cry for democracy,” as if all of these people would be appeased if they could simply have the pleasure of voting for their dictator, as we do in the west.

No, the Middle East is burning due to the confluence of 1,300 years of festering hatred which for the past 90 years has had the Israeli / Palestinian conflict as its flashpoint and rapidly rising prices for basic necessities, which have always been dear in the desert regions.

These rising prices, of course, are the direct result of the debauchery of the currencies by western central banks.

From our vantage point, it is clear that the central banks have no more room to maneuver and that they will soon throw in the towel as well.  Central banking as we know it is expiring.

So who will bail out the western governments and central banks?  The taxpayers who have grown to loathe them?  Don’t count on it.  The simple answer is that no one will.  What logically follows is that the world is about to embark upon an amazing journey called “price discovery.”  A journey that has been delayed for three long years by the meddling of the authorities will now begin without further delay.

One of the first discoveries will be to find out what are Greek Bonds are worth.  Nobody really knows, but unofficially the 10 year note is trading at 51 cents on the dollar.  And now the barbarians from the north are storming down demanding that the Greeks make good on their austerity measures or else lose their support which would mean an almost immediate default by the Greeks.

But with riots becoming a way of life, the Greeks are beginning to wonder aloud whether or not the pain is worth it.  Our guess is that the barbarians will relent in an attempt to save the Euro.  You see, the Greeks still hold the ultimate trump card, as do we all, of defaulting on their debt and doing business in another currency.  For the Greeks, it would mean a return to the drachma.

Will they play it?

With the utter and complete failure of the world financial system at hand, those who soberly decided not to heed Harold Camping’s rapture warning and are looking forward to a world that will exist post October 21.  We believe that the world will increasingly turn their collective attention to Palestine.

We recently read The Haj in an attempt to beef up our understanding of the conflict.  You can read our review of this book at https://davidmint.com/?p=361.

The summary is that Palestine needs a miracle for there to be peace between the Israelis and the Palestinians.  This conflict will move to center stage as a distraction to the aforementioned utter and complete failure of the world financial system.

What has become crystal clear to us over the past two months is that if there is not peace in Jerusalem, there cannot be peace in the world.  Those of us who believe in Jesus (if you do not, please accept this as an invitation to believe) will not be raptured until there is peace in Jerusalem.   We do not know exactly why, we simply know that this is true.

For if there is peace in Jerusalem, there will be peace in our hearts.

Once we are raptured, the tribulation will begin, which is why we urge you to accept Jesus now.  You have nothing to lose and eternity to gain.

P.S.  Please check out our Affiliates!

*See FED Perceived Economic Effect Rate Chart at bottom of blog.  This rate is the FED Target rate with a 39 month lag, representing the time it takes for the FED Target rate changes to affect the real economy.  This is a 39 months head start that the FED member banks have on the rest of us on using the new money that is created.