The Rose Festival has dominated the city’s waterfront park for the past two weeks.  Carnival rides have been up since Memorial Day weekend and an assortment of ships from the US and Canadian Navy (affectionately known as the “Canavy”) arrived late last week.  After no fewer than four parades, the annual Dragon Boat Races rounded out the festivities.

The Festival usually marks the beginning of summer, which is defined as the absence of rain for four delightful months, here in Portland.  While the rain seems to have done its part, the weather remains colder than one would expect.

This year was the first year that anyone can remember the roses not being in full bloom during most of the festival.  An uncharacteristically cold spring has caused many of the plants to hold back here from showing off their blooms.  When they do finally bloom, it tends to happen quickly and spectacularly.

For some reason the plight of the roses has us worrying about inflation.  We have been certain that inflation is on the horizon for some time now, and while there has been an uncomfortable rise in food and gasoline prices, it is hardly the degree of inflation that we had been anticipating.

Are we early or just plain wrong about inflation?  The question is troubling.  What is certain is that many of the things that we have speculated would happen are coming to pass.  Most significantly, the US Government appears to be approaching a moment of truth regarding its dire finances.  The simple question of whether or not to raise the debt ceiling has opened a Pandora’s box of questions about the nation’s spending priorities.

Now the 2012 election cycle is beginning and US lawmakers have rushed out the door to the campaign trail and have left Pandora’s box wide open on the Capitol floor with its questions racing about the room:

Should we cut entitlements?

Will the Government really go bankrupt on August 2nd?

Is the activity on Twitter accounts really open to the public?

With the national political circus about to go into full swing, any hope of a serious discussion about a realistic budget or debt ceiling is gone.  What we are now left with are desperate pleas for action from none other than Ben Bernanke, the ace lobbyist for the nation’s largest banks.

Today’s plea was made by Bernanke at the Committee for a Responsible Federal Budget’s appropriately titled annual conference: “The Debt Ceiling, Fiscal Plans, and Market Jitters, Where Do We Go From Here?”

Mr. Bernanke, in his classic, diplomatic style, told the Republican leadership in attendance that he appreciated what they were trying to do in trying to get the nation to live within its means, but that their use of the debt ceiling as a hostage was not an appropriate tool for the job.  Instead, he advocates deficit reduction goals which trigger automatic cuts if they are not met. 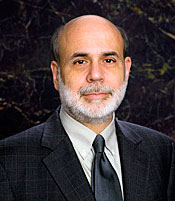 Leading Lobbyist for the Banking Sector

The United States is one of the few countries with a congressionally mandated debt ceiling.  Contrary to Mr. Bernanke’s belief (which we must say defies logic), the debt ceiling is the perfect tool to use if a lawmaker wants to put an end to out of control spending but doesn’t have the time to gain consensus for a reasonable budget plan.  It is the ultimate way to “trigger automatic cuts.”

Perceptive readers will note that what Mr. Bernanke’s proposes is the same fiscal spending control model that has worked spectacularly in Europe. Just ask the Greeks!

Still, the question remains, where is the inflation?  Our simple analysis led us to believe that under current circumstances the FED would print money to give both to its member banks and to the US Treasury until things either got better or the dollar was completely worthless in exchange for goods.  Our money is on the latter passing before the former.

It now appears that the US government has temporarily thrown a wrench in those plans.

But this should come as no surprise.  As Henry Hazlitt so eloquently explains in his book Economics in One Lesson, government intervention in the economy always fails to achieve its desired ends and almost uncannily brings about results contrary to those that the government intended.

Would it not make sense, then, that the current efforts to produce price inflation turn out to be dramatic failures as well?

Then, long after the government has abandoned its inflationary policies, a tidal wave of cash will appear quickly and spectacularly, not unlike the rose blooms in Portland this year.

This inflation will occur when the US Government, whether on its own or under compulsion from the bond markets, turns its clumsy machinations towards austerity.  In other words, when it least wants or expects it.

P.S.  If you enjoy or at least can stomach The Mint, please share us with your friends, family, and colleagues!

*See FED Perceived Economic Effect Rate Chart at bottom of blog.  This rate is the FED Target rate with a 39 month lag, representing the time it takes for the FED Target rate changes to affect the real economy.  This is a 39 months head start that the FED member banks have on the rest of us on using the new money that is created.