Just when you thought it couldn’t get any worse, Friday delivered a doozy of a one-two punch to the financial markets.  The jobs report everyone watches showed that no new jobs were added in August.  While this should come as no surprise to the sober and observant, most traders and economists took it square on the jaw with their gloves down at their sides.

The Chart of the Day, courtesy of the Money Game, shows what intelligent people like yourself, fellow taxpayer, already know.  This recession is not like anything the current authorities have ever dealt with before.  It is a balance sheet problem that has only one solution, widespread default. 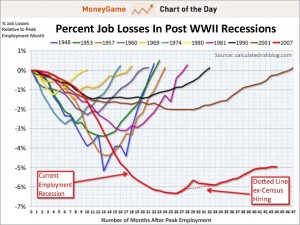 The second punch came in the form of a lawsuit filed by the US Government against some of the heavyweights in the banking industry.  A list of the defendants can be seen here and lo and behold, Bank of America is one of them.

There is much to think about over the coming weekend, but we think Michael Pento of EuroPacific Capital summed it up best in and interview yesterday:

“…do not keep money in the bank.  You have to buy something that the government cannot duplicate by fiat.”

By fiat, he means currency or, by extension, bonds that are denominated in them.  Starting in January, the FED’s cheapest money ever begins to hit main street.  Then inflation will be on everybody’s mind.