The dust is beginning to settle after what must have been a tense weekend for bank execs on both sides of the Atlantic.  We can only imagine that banks pulled out all the stops to somehow make their numbers for the third quarter end.  In a practical sense this meant putting the stranglehold on equity and commodity positions and hanging on to dollars with all their might.

The vacuum action in the dollar funding markets was so extreme that at one point it was rumored that US dollar funding for banks in Europe was apparently non-existent.  We speculated that banks were holding on to cash in the absence of clear direction from the Eurozone as to how they intend to bail out their large institutions and governments.

The action looks like a sumo wrestling battle royal on the edge of a cliff.

We left off with a question which we will consider today:

Does the fact that the FED is the only institution willing to lend dollars indicate that the US Dollar system has technically collapsed?

On the surface, it would appear that the evidence points to just the opposite.  The US Dollar index has gone through the roof which would indicate a preference for dollars, making them more valuable.  Doesn’t this prove that the US Dollar is alive and well? 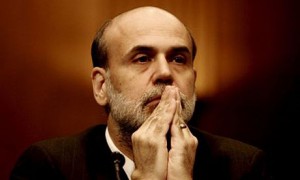 Were the Dollar backed by something real, the above would be true.  However, in the current, insane, “Debt is Money” currency regime, it tells us quite the opposite.  The fact that the Federal Reserve, the creator of the current version of the US Dollar, is the only institution willing to lend said Dollars is in fact evidence that the system has failed.

It has failed because it is no longer self sustaining.  The willingness to take on new debt, which is the life blood of a debt based currency regime, is non-existent.  The usurers need fresh blood in order to sustain themselves and finding no new victims, are beginning to feed on each other.

Financial Institutions are attempting to hoard dollars on a net basis.  Instead of lending them to productive enterprises, they are paying down their dollar denominated liabilities.  In other words, the productive classes have begun to shun the dollar on a net basis and the ultra leveraged financial sector is beginning to vaporize as the productive debts are cancelled.

The inter day funding action has, in effect, become a high stakes game of musical chairs.

While musical chairs is fun to watch, it is not evidence in and of itself of the collapse.  The evidence of the collapse emerges as we fix our gaze on the logical end of this vicious feedback loop.  The logical end is this:  The Federal Reserve ends up holding every worthless paper asset on the planet on its balance sheet which theoretically backs the dollars which it is emitting in exchange.  The banks, which are left with the dollars as their own “paper asset” and the Federal Reserve are left with staggering liabilities which they pass back and forth as investors, businesses, and consumers increasingly shun their paper.

For the moment, the world may have reached a peak in monetization, and the FED’s money machine is now backing up as the sewage of every bad loan on the planet begins to flood their balance sheet.

It is getting ugly.  How ugly?  So ugly that Bank of America’s website has been down for three straight days, presumably for technical reasons but avoiding an online bank run and forcing customers to pay $8 to bank at the branches come to mind as compelling technical reasons for a website failure.

Meanwhile, Europe is having their own “TARP moment” as Slovakian resistance is sure to be swiftly dealt with.  We know where that will lead.

Yes, the end of the insane system is approaching.  It won’t be long now until the authorities pull out their ultimate trump card, a wholesale change of the currency.  With nearly every government and bank on the planet heading to the poorhouse, it is the only trick that the currency regime has left.

Don’t fall for it, fellow taxpayer, for it too shall fail.