{Editor”s note: The following is a continuation of the series “Of Money and Metals.”  Please click here to view the Part I}

In 1913 the US Congress passed the now infamous Federal Reserve act.  Not unlike the recent passage of the 2012 NDAA, it happened during the winter holiday when the populace was largely distracted by the festivities.

While the Federal Reserve act has wrought many injustices on the earth, undoubtedly the greatest injustice which continues to cause the greatest amount of damage to mankind was the subtle replacement of money proper with Federal Reserve notes.  This action effectively declared that debt is money, in direct violation of natural law. 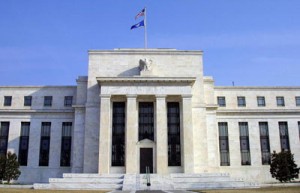 The Federal Reserve, in direct violation of Natural Law

While this fact may have seemed like a minor detail with regards to custodianship at the time, the declaration was, in essence, handing Frodo’s One Ring to the financial and governmental authorities of the earth.  For it gave them largely unfettered access to the accumulated savings of the entire earth and, in the case that the savings ran dry, the unhindered ability to incur debts against the future production of the entire earth as well.

The only thing that they needed was to compel the entire earth to accept debts as money in everyday exchange.  In the west, they have largely succeeded.  In the east, the acceptance of debt as money has been violently forced upon the populace through a series of wars.

Yet as we stated yesterday, debt and money are polar opposites.  To declare that debt is money was not only insane, it was a direct violation of natural law.  This violation of natural law began to reap its terrible harvest in 1933 with the onset of the great depression.  Yet instead of admitting defeat and leaving the quantities of debt and money in the hands of the people, where it naturally belongs, the authorities presented an academic apologist to confirm for them that debt was indeed now money and that all that was required was more of it.

Enter John Maynard Keynes, best known as the father of the Keynesian school of economic thought.  Mr. Keynes developed a thesis which “correctly” diagnosed that the economic problem facing the earth was a lack of money.  What Keynes and those who subscribed to his theories have failed to realize is that the Federal Reserve, in declaring that debt was money, had placed a significant impediment to the creation of money, the remedy which the earth desperately needed.

Instead, Keynes and his colleagues skipped over the only viable solution, namely, allowing the free market to determine what constitutes debt and money and in what quantities each was needed, and offered the world a solution which has been the equivalent of injecting poison directly into the veins of the ailing economy.  The poison of which we speak was injected as a result of the testing erroneous hypothesis:

“The problem is that there is not enough money.  Because debt is now money, it follows that more debt must be incurred to create the money necessary to spur production, employment, and all the things that people now associate with a healthy economy.  Further, there is not enough money precisely because the people are not sufficiently indebting themselves.  Since the people are not inclined to further indebt themselves (Editor’s note:  the people are naturally reacting to natural law, which naturally calls for less debt and more saving), it is the duty of the government to increase overall indebtedness, and therefore the money supply, on behalf of the people.  It must force the people to do what they cannot (or more accurately, will not) do for themselves.”

As insane as this line of thought sounds, it is today generally accepted as natural law by nearly every Harvard trained economist, and therefore government and central bank official, on the planet.  The only difference between the 1930’s and today is that today, circa 2012, this disastrous line of thought is practiced on a much grander scale.