A few days ago, we laid out three seemingly absurd reasons why we have decided not to vote in the upcoming elections, with the exception of city and county referendums.  If you missed it, you can read our rant here:

Three Reasons why we’ve stopped voting, The Trail of Tears

In the spirit of full disclosure of our voting record, we have voted in just two of the five Presidential elections that we have been eligible to cast a vote in.  Namely, in 2004, we voted for the incumbent on the indefensible reasoning of choosing the “Lesser of two evils,” for though it be the lesser, one has still chosen evil.  In 2008, we wrote in Ron Paul, albeit with an overwhelming feeling of powerlessness, as write in votes are, if anything, a symbolic gesture.

In the meantime, we have dutifully filled out countless circles on scantron sheets and scanned countless pages of voter’s guides in a fruitless effort to understand, to loosely quote Joe DiMaggio as he came upon his then wife, Marilyn Monroe, striking her now famous pose as she stood over a steam grate in Times Square, “what the hell is going on around here.”

By the time the most recent ballot arrived in the mail, along with a voter’s guide which rivaled the yellow pages in size, our disillusionment for what today passes as democracy was complete.  We resolved, then and there, to stop tacitly endorsing the enslavement and slaughter of persons with which we have no quarrel.  We would withhold our vote.

Given our history and our most recent resolution, it can be said that we have not exactly been the model of someone fulfilling their civic duty.  Yet strangely, since coming to grips with our non-voter status, we have never slept better.

Are we alone in our disillusionment?  Or is our shunning of civic responsibility something native to the American landscape?  We have taken it upon ourselves, fellow taxpayer, to provide you with the shocking answer to these questions.

To arrive at the VAP totals, which were provided for the election years 1960 and later, for the prior elections (1828 – 1956), we did the simple inverse math of dividing the number of votes by the stated voter turnout percentage.  This gave us a “theoretical” VAP with which to perform our analysis.  We then pulled census data for each year which coincided with an election year to satisfy ourselves that our methods were sound.

Within the data set, we then broke the number of popular votes cast in each election, which is also available on Wikipedia, down three ways.  Those for the candidate with the majority of votes, those cast for the one who came in second, and the combined votes for all other candidates which were counted.  The counts are presented in the order of the highest number of popular votes received, not those cast by the electoral college.  It is interesting to note that in four times in US History (three of which, 1876, 1888, and 2000, appear in our data set) the candidate with the highest tally of popular votes was not elected to the Presidency.

We then took the number of popular votes by category and divided it against the VAP for those deemed eligible to vote to arrive at our final data point, the percentage of the VAP which cast a vote for the candidate.  As we did this, we added a fourth category which we call the “No vote,” to capture, for comparison purposes, the percentage of the VAP who simply did not cast a ballot.

We then took the four resulting percentages by election year, from 1828 – 2012* (*We extrapolated the findings based on 2008 turnout and today’s Intrade market for the election) and asked two questions:

1)  In each election analyzed, was the President elected by a simple majority of the total VAP?

2)  In each election analyzed, did the percentage of No votes represent an absolute majority of the VAP?

While we wouldn’t stretch this analysis to question the legitimacy of a Presidential election, the findings are nonetheless fascinating with regards to the presence of non-voters in America.  You can see a graphic of the percentages for each candidate juxtaposed against the “No vote” candidate by election year, on the plot below.

On the plot, the highest mark is the winner.  The “X” on the plot represents where the “No vote” candidate, if you will, would have finished.  The colors of the other markers, despite their blue, red, and green tones, do not indicate which party won that year, only the percentage of votes received by the first, second, and all other candidates for whom votes were cast:

In summary, when taken against eligible voters, the No vote majority began to emerge in 1916 after a 75 year hiatus, and took firm command of the polls in 1968.  However, 2012 is shaping up to be an exception, and, if current trends hold, it can be said that, come November 7th, there will be a President actively selected by a majority of the eligible VAP in the US for the first time since Lyndon B. Johnson.

Now, most voters in the US are aware that women were not allowed to participate in elections as voters until 1920.  Don’t worry ladies, nor the rest of those who were/are part of the disenfranchised, we have not forgotten you.  In fact, when the analysis is expanded to include all of the presumed VAP over 18, regardless of their technical eligibility to vote, (which is the number used to arrive at the voter turnout percentages) the results are even more dramatic: 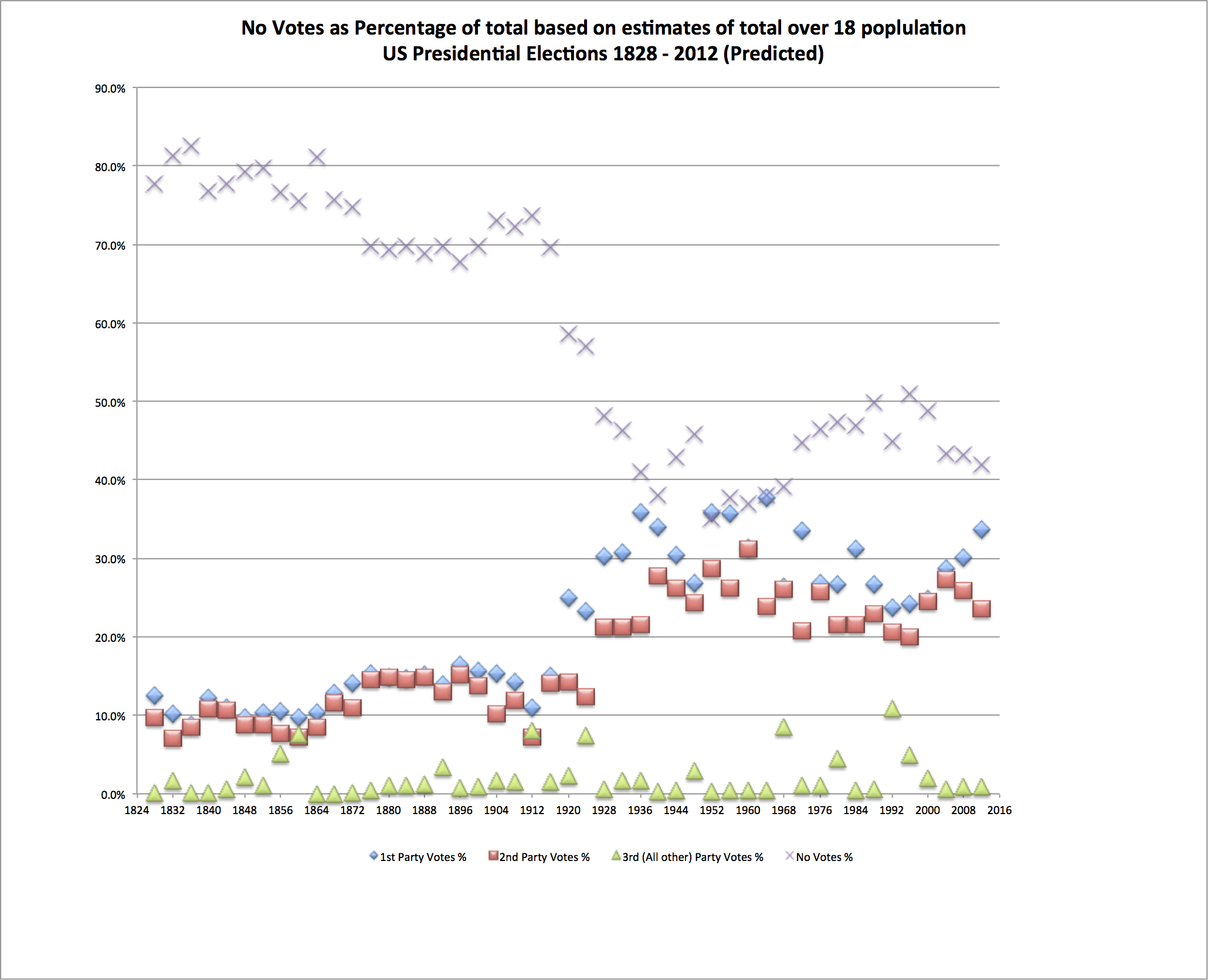 What we see in this analysis is that, since 1828, there has been only one President who was elected by a simple majority of the VAP, Dwight Eisenhower in 1952.  In fact, those who did not vote consistently represented an absolute majority until 1928, which means, depending upon how one interprets the No-votes, there may not have been a President who was elected to office in the purest democratic sense until Eisenhower.  While we admit it is a bit far fetched, it is nonetheless fascinating to ponder.


Voter frustration/apathy, after taking a break through a good portion of the 20th century, returned to America in 1996, as Bill Clinton defied the indifferent masses, which again represented an absolute majority of Americans as it had in all pre 1928 elections, and extended his stay on Pennsylvania Avenue for four more glorious years.

Blanco o Nulo?  The question of interpretation of the Non-votes.

Blank or Null?  The answer to this question determines how one will ultimately interpret the data which we have gathered.  Are we to take the “No votes” as “votes in Blanco,” meaning that the lack of a countable vote signifies tacit assent to the selection of the voting majority?  This is the generally accepted analysis of the absence of votes in America, where voting is not obligatory.

Or shall we take them, or at least a portion of them, as “Nulo,” meaning that the absence of a countable vote signifies a disillusionment with the democratic process so deep that one simply refuses to go through the motions to lend even a shred of legitimacy to the process?

In Bolivia, it is obligatory to vote, if you cannot provide proof that you have voted, you can face a fine, or worse.  This legal obligation has also given rise to an explicit form of voting, “in Nulo,” which can be cast if one chooses not to select one of the candidates or decide on a measure which has been presented.

It is the formalization of a conscientious objection.  The likes of which have only been officially tallied in US in the bizarre election of the year 2000, when a Washington DC resident filed a vote as an “abstention” in protest of Washington DC’s lack of representation in Congress.

So which is it, blanco or nulo?  It is an important question, and one that, unlike Bolivia, the United States voting regimen currently has no tool to answer.

We have provided a link to the data sheet used to create the above graphics so that you can check our work as well as expand and hopefully improve upon it.  Please feel free to download it and use it as you wish.

No Votes – Analysis and Charts of US Presidential Elections 1828-2012

As November 6, 2012 approaches, the votes are tallied, and a President of the United States is declared, stay tuned long enough to catch the data on voter turnout.  With the latest measure of voter apathy in hand, go to a quiet place and ask yourself the following question:

Did the American people win the election?  If our predictions are correct, the answer will be the same as it has been with regards to every election before and since everybody liked Ike:

We’ll have lost yet again.