We have been remiss in our regular correspondence to you, fellow taxpayer, and we pray you will forgive us.  We have completed and published the first two volumes in our series, called “Why what we use as Money Matters.”  It is our humble attempt to explain, well, why what we use as money matters.  The volumes are currently available on Amazon’s Kindle as wells as in various eBook formats on Smashwords and can be accessed at the following links: 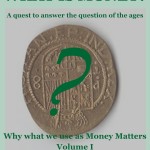 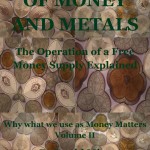 Our objective in writing the series is to convince humanity of two truths:

1.  That if the activities of the earth are to be in balance with the available resources, money must be something natural, in other words, not debt or a sort of promise or idea.

2.  That Anarchy is an ultimate given, and that Capitalism is the best response to this given.

The governments of the world, as we have known them, are disintegrating, but this will be addressed in our upcoming volumes in the series.

We would be honored if you would give them a read and keep watch for the upcoming volumes, for these ideas are exceedingly important.

While the Fiscal cliff and subsequent fallout have taken a toll on the average working American to the count of 2% right where it counts, there is a something altogether wonderful and dreadful knocking at the door:

The wave of inflation that has been on the horizon ever since Federal Reserve monetary policy gave us new acronyms such as ZIRP and QE, appears to be breaking and will soon wash ashore.  Now that it is breaking, the only thing that stands between it and the average working American is some flavor of collective default by the nation’s banks.  Thanks to the programs which are represented by the above mentioned acronyms, this is highly unlikely.

At this point, then, the only entities whose default could cause such a chain reaction are the Federal Reserve, US Treasury, or possibly the ECB.  However, here at The Mint we believe that the tidal waves of cash that have been unleashed may even make the default of one of these institutions manageable.

The Federal Reserve has succeeded in the sense that they have flooded the system with so much cash and have repeatedly stated in no uncertain terms that they will backstop the Treasury and MBS market until the US Dollar’s last dying breath.  While for a time, maturing debt obligations were mopping up the liquidity that the FED was pumping in, most consumers have now moved to extend maturities via refinancing or, on the conservative end, have closed out both cash and debt positions by paying off mortgages with savings which had been “ZIRPed” into dormance as an income producing asset.  This collective action has put the economy in a sort of warped reset where the fiat currency debt monster can run amok for the foreseeable future, with the attendant fatal real world consequences.

Oddly enough, as the FED begins to claim victory over the financial crises which its own policies have made possible, the double whammy of the Basel accords and Dodd-Frank regulatory regimens may eventually eliminate many of the financial institutions which today are household names.

In what is perhaps an unintended consequence, the afore mentioned regulations have given what is known as a REPO contract its walking papers.  In our oversimplified understanding of the matter, for simplicity is a virtue here at The Mint, the REPO arrangement, which is a glorified demand deposit, has allowed banks to hold their client’s funds on their balance sheet as Tier I capital.

In 2017, these arrangements will be forced to be properly classified as demand deposits, and many of the wiser financial institutions, who already have a long way to go to reach the Basel Tier I requirements, are already steering their clients away from these arrangements.

How much capital will this pull out of the banking system?  Nobody knows.  But what is for sure is that unwinding these REPO positions will leave some institutions exposed and unprepared.  They will probably become aware of their exposure via the classic individual financial panic mechanism: