The following is an excerpt from our upcoming ebook release, “What is Truth?  On the Nature of Empire” which is volume IV in our series “Why what we use as Money Matters.”

As we researched the book, we were joined unexpectedly by James Tissot by way of his astonishing artwork.  His depiction of Joseph and His Brothers approaching Pharaoh adorns the cover, and his great works, such as this one entitled:  “Ce que voyait Notre-Seigneur sur la Croix” or “What Our Lord Saw from the Cross” in English have moved and inspired us as we have toiled on this volume.  We pray that they will move and inspire you as well. 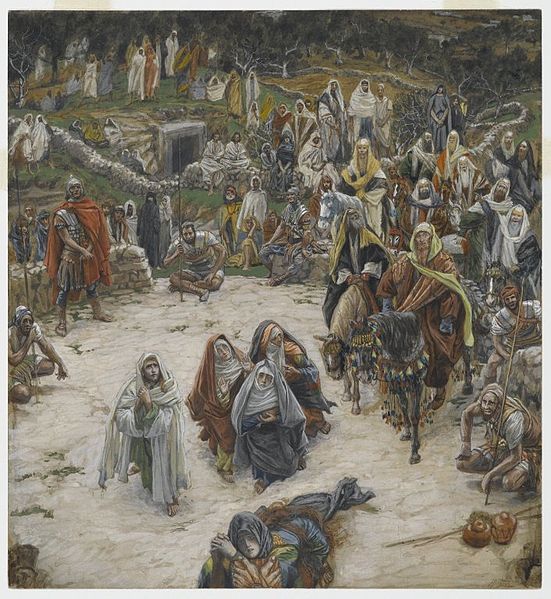 What is Truth? On the Nature of Empire

As men and women go about their daily occupations, it is relatively common to stop and form an opinion on the benefits or detriments to society of a particular action taken by the government.  While it is easy to form an opinion and then take sides of an issue, perhaps the most important question that can be asked is not, “What should the government do?”  but rather, “Why is the government doing anything?”

The reason that the second question is rarely, if ever asked is that the concept of Empire, or a large scale government which is seen as the ultimately authority, has been part of the human experience for so long that it’s existence or utility are rarely, if ever, questioned.  We pray that this volume has caused you to give it some thought.

The ignoble goal of all Imperial activities has been to establish and maintain primacy in the affairs of men and women throughout the entire known world.  This demand for primacy and allegiance takes the form of the Empire claiming a monopoly on the use of force, which is invariably followed by demands for tribute.  Ultimately, the head of Empire will make an appeal to divine right and declare him or herself a deity.  As the Empire begins to fade out of existence, it tends to become more violent and intolerant, not conscious of the fact that its subjects are devoting a great deal of time and energy to escaping its grasp.

Those who remain are left to either perish at the hands of the Empire or at the hands of those who see no alternative save the use of the force of arms to overthrow the Imperial leadership, which has been necessarily populated by the members of society who are best able to suppress their conscience in blind pursuit of the Imperial imperative.

Such is the nature of Empire, and it is lethal to human progress.  The existance of Empire on the earth ensures that all who inhabit it will take the side of Cain, who in the Biblical account related in Genesis chapter 4 lead his younger brother Abel to a field where he murdered him, or Abel, the innocent.  Cain’s murderous act is born out of the mistaken belief that the removal of others from the earth will secure one’s place before God and man.  It is an idea that is the driving force behind Imperial action, and it is death.

Fortunately, there is a better way.  The better way lies neither in violently or peacefully resisting the Empire, it lies in the doctrine of non-resistance, which paradoxically is the best way to ensure one’s safety and security regardless of the state of Imperial degeneration that one finds themselves surrounded by.

However, the path of non-resistance is not without risk.  Many of history’s most noted adherents are noted because they perished while clinging to this principle.  It is not for the faint of heart, yet it is attainable.

The power to do this is found in the person of Jesus Christ, who replied to the Imperial lament, voiced by Pontius Pilate, an instrument of the Roman Empire, “What is truth?”

Jesus’ response, which is not recorded in the Biblical account but made clear by His subsequent actions, echoes through 2000 years of Imperial rule to guide our actions today:

In His reply, we find the power to embrace the doctrine of non-resistance, which is the only hope that mankind has to live in peace both here and now, regardless of the proximity of Imperial rule to his or her daily activities, and in eternity.  For to forgive is to live in eternal peace with God himself.

Stay tuned in to The Mint for the upcoming ebook release!