Last week, we made a vague promise to provide data to back a claim that the US Debt at the FED had already been largely cancelled via the various quantitative easing (QE) operations that have been realized over the past several years.  This fact makes any talk of solving the moronic “Fiscal Cliff” via extreme methods such as minting platinum coins with $1 Trillion face value unnecessary. 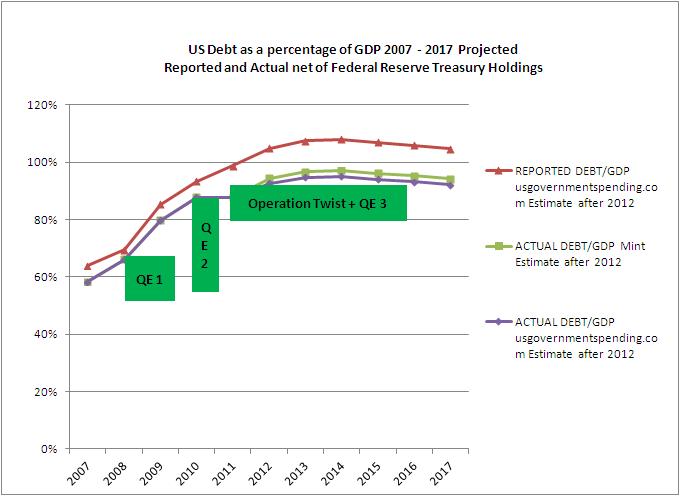 As you can see, the real US National debt to GDP is closer to 94% rather than the projected 105% which the official US National debt figures would suggest.  The Federal Reserve, at last count, holds roughly $1.6 Trillion of US Treasury debt.  While this debt is still theoretically on the books, it can essentially be removed from consideration when arguing about the need to solve the debt problem, vis-a-vis the moronic Fiscal Cliff debacle that is playing out in Washington.

94% is an alarming level, but according to our projections, the current US Government current account deficit cycle is about to end as the waves of new currency released into the global economy by the Federal Reserve and other central banks begins to run through the coffers of the US Government.

Despite the desperate proclamations by Congress that it will be difficult to solve their (yes, this is their problem) impasse, indicators such as an EFT that tracks the Defense industry, XAR, which would theoretically be the hardest hit were the US to fail to address portions of the Fiscal cliff such as suspending the sequestered spending cuts agreed upon as a result of the infamous Debt ceiling debacle, are not showing any signs of trouble.

In other words, the financial markets are assuming that the US Congress and Executive, when push comes to shove, will wind up and kick the can a mile down the road, as they did when the debt ceiling was bearing down on them.

According to our projections, there is no debate, the Fiscal Cliff does not even exist, rather, it is a figment of the collective imagination.

We do not believe in money, at least not in the form of money that is currently used in America today, and it appears that the US Congress is beginning to come around to our point of view.  If the Federal Reserve will simply finance deficits ad infinitum, why even bother with the Fiscal Cliff charade?  We are still working to answer that question, and leave it for you, fellow taxpayer, to ponder along with us.

The real question, the one which we wrestle with every day here at The Mint, is when will the faith in the Federal Reserve be destroyed?  With the advent of the various QEs beginning in 2008, the Federal Reserve system effectively collapsed.  The creation of credit was no longer self sustaining in the economy.  The FED has been living on borrowed time.

As December 21 approaches and those who have misinterpreted the Mayan calendar wonder if December 22nd will come, we look forward to the 22nd of December, when the Federal Reserve’s charter is rumored to expire, and YouTube’s “Man of Truth” famously prophesied that the Federal Reserve would go bankrupt. Technically, he said “December 2012”, but, after 99 years, why split hairs?

Chances are that the world will wake up on December 22nd and carry on.  However, if you see the words “Force Majeure” in the financial headlines, get ready to calculate prices in a new currency for 2013.  For the US may swerve to avoid the Fiscal Cliff, but sooner or later it will drop off the currency cliff.

That is when things will get very interesting indeed.