Robert D. Kaplan, Stratfor’s Chief Geopolitical Analyst, published in interesting report yesterday recounting his clairvoyance in predicting the rise of anarchic rule in certain African states (predictions that came to pass) and the general erosion of state governance throughout the world. 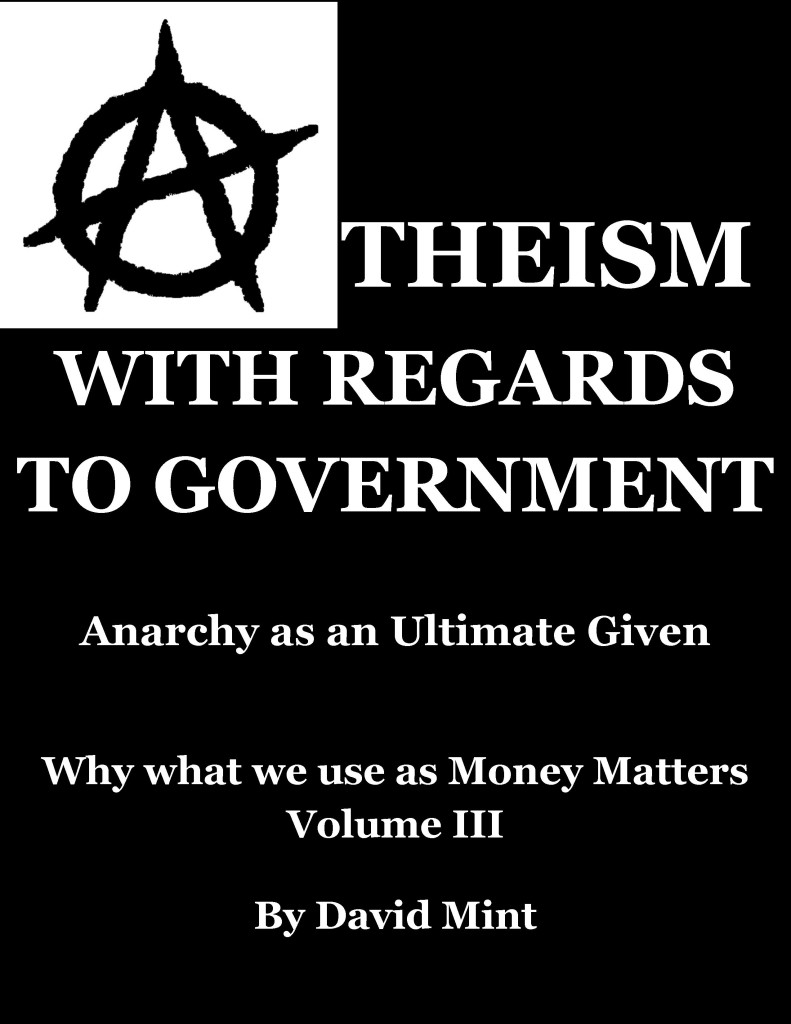 Kaplan’s observations are of particular interest to us, as we hold the belief that Anarchy is an Ultimate Given, meaning that groups of people tend to search for a coordinated approach to their inherently anarchic surroundings, the most recent of which has been the democratic nation state.

While Kaplan’s analysis appears to paint a picture of chaos and lawlessness, which indeed are the hallmarks of regime change, we see democratic nation states and their attendant monetary regimes as things that the world is currently shedding for its ultimate betterment, as they now serve to restrict trade instead of facilitating it as once was their chief contribution to the livelihood of the governed.

The continued adoption of communication via the internet is moving toward a state of maturity from which the natural progression towards internet facilitated trade amongst parties is causing the world to eschew the label of their respective nation state and replace it with one of religion or other shared affinities which are readily accessible given the pace of mobile communication expansion.

Kaplan also makes a clear distinction between the need for strong governance of urban societies whereas rural/agrarian societies tend to govern themselves, a point that is lost on most observers, not the least of which are the political classes in the current nation state, which tend to focus on national borders as the only limitations to their sphere of influence.

While Kaplan’s analysis is interesting and serves to explain what is likely to continue to occur for the next 5 to 20 years in terms of the erosion of central governments, he appears unable to speculate as to what form the governing body of a large geographical area would take.

As such, we will speculate for him.  The world is in the process of segregating itself into phyles, or groups of people aligned in terms of ideologies, be they religious or otherwise, independent of geographic location.  These phyles will tend to unite, geographically where possible, but primarily through trade relationships.  Once these trade relationships are established, the increased division of labor will resume within the phyles, giving rise to a true increase in the Monetary premium of items that up until now have not been identified as money.

Bitcoin is one example of what is essentially a pure monetary premium transmitter.  As the nation states continue to crumble, the foundations for new societies united by ideology and/or trade relations are already being laid, and we hope and pray for a peaceful transition onto them for all, as the failed model of the democratic nation state based on mere borders must be laid to rest peacefully for humankind to truly prosper.

Why So Much Anarchy?

Twenty years ago, in February 1994, I published a lengthy cover story in The Atlantic Monthly, “The Coming Anarchy: How Scarcity, Crime, Overpopulation, Tribalism, and Disease are Rapidly Destroying the Social Fabric of Our Planet.” I argued that the combination of resource depletion (like water), demographic youth bulges and the proliferation of shanty towns throughout the developing world would enflame ethnic and sectarian divides, creating the conditions for domestic political breakdown and the transformation of war into increasingly irregular forms — making it often indistinguishable from terrorism. I wrote about the erosion of national borders and the rise of the environment as the principal security issues of the 21st century. I accurately predicted the collapse of certain African states in the late 1990s and the rise of political Islam in Turkey and other places. Islam, I wrote, was a religion ideally suited for the badly urbanized poor who were willing to fight. I also got things wrong, such as the probable intensification of racial divisions in the United States; in fact, such divisions have been impressively ameliorated.

However, what is not in dispute is that significant portions of the earth, rather than follow the dictates of Progress and Rationalism, are simply harder and harder to govern, even as there is insufficient evidence of an emerging and widespread civil society. Civil society in significant swaths of the earth is still the province of a relatively elite few in capital cities — the very people Western journalists feel most comfortable befriending and interviewing, so that the size and influence of such a class is exaggerated by the media.

The anarchy unleashed in the Arab world, in particular, has other roots, though — roots not adequately dealt with in my original article:

The End of Imperialism. That’s right. Imperialism provided much of Africa, Asia and Latin America with security and administrative order. The Europeans divided the planet into a gridwork of entities — both artificial and not — and governed. It may not have been fair, and it may not have been altogether civil, but it provided order. Imperialism, the mainstay of stability for human populations for thousands of years, is now gone.

The End of Post-Colonial Strongmen. Colonialism did not end completely with the departure of European colonialists. It continued for decades in the guise of strong dictators, who had inherited state systems from the colonialists. Because these strongmen often saw themselves as anti-Western freedom fighters, they believed that they now had the moral justification to govern as they pleased. The Europeans had not been democratic in the Middle East, and neither was this new class of rulers. Hafez al Assad, Saddam Hussein, Ali Abdullah Saleh, Moammar Gadhafi and the Nasserite pharaohs in Egypt right up through Hosni Mubarak all belonged to this category, which, like that of the imperialists, has been quickly retreating from the scene (despite a comeback in Egypt).

No Institutions. Here we come to the key element. The post-colonial Arab dictators ran moukhabarat states: states whose order depended on the secret police and the other, related security services. But beyond that, institutional and bureaucratic development was weak and unresponsive to the needs of the population — a population that, because it was increasingly urbanized, required social services and complex infrastructure. (Alas, urban societies are more demanding on central governments than agricultural ones, and the world is rapidly urbanizing.) It is institutions that fill the gap between the ruler at the top and the extended family or tribe at the bottom. Thus, with insufficient institutional development, the chances for either dictatorship or anarchy proliferate. Civil society occupies the middle ground between those extremes, but it cannot prosper without the requisite institutions and bureaucracies.

Feeble Identities. With feeble institutions, such post-colonial states have feeble identities. If the state only means oppression, then its population consists of subjects, not citizens. Subjects of despotisms know only fear, not loyalty. If the state has only fear to offer, then, if the pillars of the dictatorship crumble or are brought low, it is non-state identities that fill the subsequent void. And in a state configured by long-standing legal borders, however artificially drawn they may have been, the triumph of non-state identities can mean anarchy.

Doctrinal Battles. Religion occupies a place in daily life in the Islamic world that the West has not known since the days — a millennium ago — when the West was called “Christendom.” Thus, non-state identity in the 21st-century Middle East generally means religious identity. And because there are variations of belief even within a great world religion like Islam, the rise of religious identity and the consequent decline of state identity means the inflammation of doctrinal disputes, which can take on an irregular, military form. In the early medieval era, the Byzantine Empire — whose whole identity was infused with Christianity — had violent, doctrinal disputes between iconoclasts (those opposed to graven images like icons) and iconodules (those who venerated them). As the Roman Empire collapsed and Christianity rose as a replacement identity, the upshot was not tranquility but violent, doctrinal disputes between Donatists, Monotheletes and other Christian sects and heresies. So, too, in the Muslim world today, as state identities weaken and sectarian and other differences within Islam come to the fore, often violently.

Information Technology. Various forms of electronic communication, often transmitted by smartphones, can empower the crowd against a hated regime, as protesters who do not know each other personally can find each other through Facebook, Twitter, and other social media. But while such technology can help topple governments, it cannot provide a coherent and organized replacement pole of bureaucratic power to maintain political stability afterwards. This is how technology encourages anarchy. The Industrial Age was about bigness: big tanks, aircraft carriers, railway networks and so forth, which magnified the power of big centralized states. But the post-industrial age is about smallness, which can empower small and oppressed groups, allowing them to challenge the state — with anarchy sometimes the result.

When the Soviet Union collapsed, societies in Central and Eastern Europe that had sizable middle classes and reasonable bureaucratic traditions prior to World War II were able to transform themselves into relatively stable democracies. But the Middle East and much of Africa lack such bourgeoisie traditions, and so the fall of strongmen has left a void. West African countries that fell into anarchy in the late 1990s — a few years after my article was published — like Sierra Leone, Liberia and Ivory Coast, still have not really recovered, but are wards of the international community through foreign peacekeeping forces or advisers, even as they struggle to develop a middle class and a manufacturing base. For, the development of efficient and responsive bureaucracies requires literate functionaries, which, in turn, requires a middle class.

The real question marks are Russia and China. The possible weakening of authoritarian rule in those sprawling states may usher in less democracy than chronic instability and ethnic separatism that would dwarf in scale the current instability in the Middle East. Indeed, what follows Vladimir Putin could be worse, not better. The same holds true for a weakening of autocracy in China.

The future of world politics will be about which societies can develop responsive institutions to govern vast geographical space and which cannot. That is the question toward which the present season of anarchy leads.

Why So Much Anarchy? is republished with permission of Stratfor.

Read more: Why So Much Anarchy? | Stratfor