Today we find ourselves, along with the rest of the inhabitants of the Willamette Valley, enjoying what has been dubbed “Snowpocalypse 2014.”  The valley’s residents are now three days into this rare event and, while much in the way of normal transit has been disrupted (truly, it does not take much snow to paralyze Portland).  We do not have a solid measure of just how much snow has fallen and whether or not the event lives up to its name, what is unmistakable is that the snow is beautiful and is has revealed many a great sledding hill in our midst.

Some of our faithful readers will recall that back in December, we began exploring the Monetary Premium, the portion of an item’s relative value owed to the utility of an item as money (those new to The Mint can glance back at these essays for a thorough exploration of the definition of money).  In that essay, we presented the portion of the Monetary premium that arises as a result of an Imperial authority demanding tribute in said currency.  Logically, it may also be said that laws declaring what is legal tender or any law which dictates the monetary unit in which debts are to be cancelled in an economic zone will also give rise to the monetary premium. 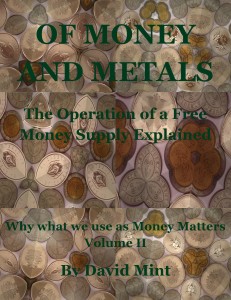 For those not familiar with the term, the division of labor is what makes urban society possible.  While perhaps the most easily understood metaphor is that of the assembly line, where each individual worker dedicates him or herself to completing one facet of the production process, relying on their counterparts on either side of them to ensure that the chain of production, of which they form part of, remains unbroken.

Economic systems are, in a sense, a collection of interconnected assembly lines both large and small, with each member of the system dedicating themselves to a set of tasks; the more time and energy that each individual is allowed to dedicate to their task, the more efficient each individual generally becomes.  The fact that each individual dedicates an increased amount of time and energy to a specific task gives rise for other members of society to pitch in and specialize in tasks that others cannot do for themselves given the specific scope of their labors.

The division of labor, if allowed to rise and sort itself out on its own, is generally good for economic output, as increased efficiencies translate into increased outputs.  However, as individuals increasingly specialize in certain tasks, they increasingly rely upon other members of society to fulfill their need.  As logic would follow that the increased division of labor does not allow much time for barter transactions, an increase in the division of labor always gives rise to the need for a monetary premium to both emerge and expand, attaching itself not only to traditional transmitters but giving rise to new ones as well.

Once the monetary premium expands, it gives rise to an increase in the division of labor, and in this way the dynamic between the two drives real economic growth.

Limitations on the Division of Labor and Monetary Premium

After reading the above, it should be clear that both the division of labor and the monetary premium are generally good for humankind, and that both factors driving real economic growth, if left to operate unhindered would eventually run up against and adapt to the limitations of the natural environment.

However, today, circa 2014, both the division of labor and monetary premium are hindered not by natural limitations, but by limitations placed upon them by well meaning legislators.  While all legislation tends to have either a direct or indirect effect on economic activity, there are two kinds that are particularly harmful to economic growth as they cut off the lifeblood of economic expansion:  The dual expansion of the division of labor and the monetary premium.

The first are laws dealing with minimum wages.  While minimum wages laws strive to guarantee a living wage for all members of society, they never achieve this goal and, in the process, serve to directly hinder the expansion of the division of labor when actual wage rates for certain activities are below the minimum wage rate, and serve no purpose when wage rates are above it.

We all suffer to some degree due to manmade hindrances to the expansion of either the monetary premium or the division of labor; however, it is those farthest from monetary spigots, as defined by legal tender laws, who suffer the most.  In order for peace and prosperity to accrue to the greatest possible number of persons, it is critical that we grasp the importance of encouraging the division of labor to operate unhindered.